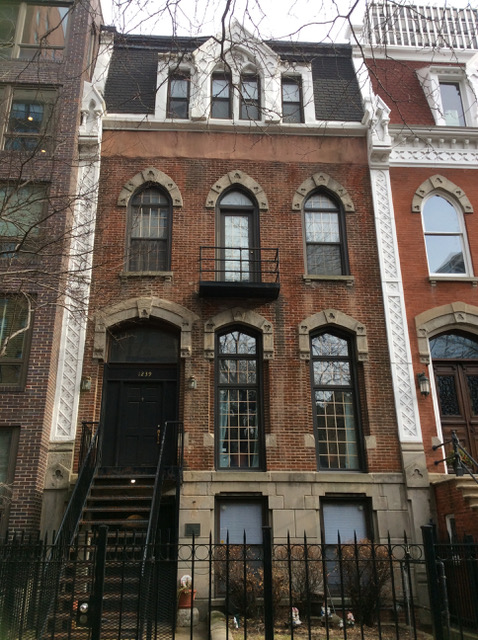 The young man, who was one of the building’s residents, unlocked the front door to the Chicago apartment building once occupied by Ernest Hemingway and his first wife Hadley Richardson. I followed him inside.

Crossing the threshold, the first thing I saw in the vestibule was the famous portrait of Ernest with a full white beard and fisherman’s sweater with a rolled knitted collar, taken in 1957 in Cuba. In his memory of that photo session, the portrait’s photographer, Yousuf Karsh, said he expected to meet a man much like his masculine fictional heroes. Instead, he was surprised to find in Ernest someone clearly very shy.

Beyond a second, inner door, a further surprise awaited.

Moving through the open doorway, I entered the shared hallway to the apartment building. This space, which is not open to the public, is the common hall through which the building’s residents pass to reach their own apartments. It had been transformed into a Hemingway shrine. This long corridor contained many books displayed in clear horizontal cases, while numerous framed photographs adorned the walls.

Among the books were several editions of early Hemingway paperback novels with their garish, overly-bright drawings that make them look like cheesy mass-market romances. Most astoundingly, there were even some shoebox dioramas on the wall containing little Hemingway dolls and depicting scenes from his life: Ernest on safari in Africa; Ernest at home in Ketchum Idaho with, in one hand, a tiny paper-roll constructed beer.

Best of all, to my mind, was a typewriter that sat on display with a large paper sign on it that said: “Do not touch!” It cannot have been Hemingway’s typewriter. His precious Corona–which had been a birthday gift from Hadley–went with him to France. The young man explained to me that the typewriter on display had been found during a renovation project hiding in the building’s walls. That seemed fitting: like symbolic shorthand from the past, saying: “a great writer once lived here,” as indeed he had.

As we left, the young man and I crossed the street to look back at the building together. He admired its architecture and told me it pleased him that so little about the building had changed since its original construction. “It’s a lovely building,” he said.

The word “architecture” entered the English language in the 1560s via the French architecture, which came out of the Latin architectura, from architectus: “master builder, chief workman.” Hemingway thought if you were going to be any good as a writer, you had to take seriously the issue of how things should be constructed. In Death in the Afternoon he wrote: “Prose is architecture, not interior decoration.”

Being inside this quaint and quirky abode that once served as Ernest and Hadley’s first home together as a married couple made me feel glad Hemingway’s life and writing still provoke the kind of impassioned devotion that had led the building’s owner to create and maintain in the building’s entranceway a kind of private museum.

I hadn’t touched the typewriter; but it made me happy just to see it.

Wyoming and Montana Conference Preview - Recording
In just over a month, many of us will meet out west for the...
END_OF_DOCUMENT_TOKEN_TO_BE_REPLACED