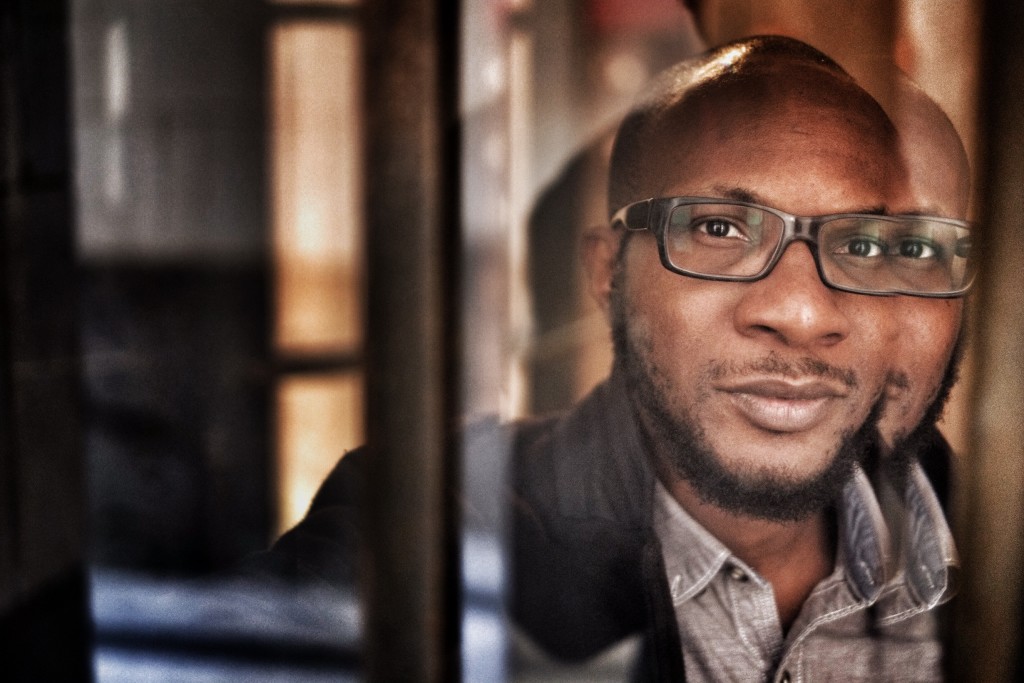 Q: In your new book Blind Spot you combine text with images. Please explain the inspiration for the creation, and talk about some of the photo-text combinations.

A: When I began to pair photographs with text, with the intention of making a book, the process was organic. On the one hand, I had jotted notes about a given location or idea; on the other hand, I’d have a photo I had selected from my archive of thousands, a photo that called to me in some insistent way. The work was then to introduce the unfinished writing to the as yet uncontextualized photograph. Once I began this work, I fell into a rhythm with it, I was very energized by it, and I wanted to do one or two every day. I ended up with a hundred and fifty pairs. It was very intense and satisfying work.But even before I got far into the process, I realized that this method had a number of indirect antecedents. Chris Marker’s “Sans Soleil,” a film from the early 80s that hovered beautifully between fiction and documentary, was especially on my mind. I treasure that film for its capacious range, but also for its brilliant use of montage. Marker really made me feel more confident about moving boldly from one image to a radically different one, and on to the next, and to trust that the subterranean connection between these images would eventually become evident. I also thought a lot about John Szarkowski’s book on Atget, which used Atget’s photographs and Szarkowski’s interpretive text in this 1:1 fashion. Other influences on Blind Spot include the photographers Luigi Ghirri, William Eggleston, and Stephen Shore; writers like Emily Dickinson, Roland Barthes, and James Salter; and people who work brilliantly across genres like Michael Ondaatje, Anne Carson, and John Berger. I try to be as open as possible to as many influences as possible, making use of whatever I need and discarding whatever I don’t.

Q: Why is the book titled Blind Spot?

A: One morning in early 2011, I woke up to the astonishing discovery that I was blind in one eye. I eventually got a diagnosis of retinal damage, a condition the doctor called Big Blind Spot Syndrome. My eyesight did return, after a couple of days, but the idea of the “blind spot,” which I had already evoked in a passage in my novel Open City, stuck with me. The metaphorical resonance of it was certainly poignant: what do we miss when we look at a scene or think about a situation? And when I started to put this new book together, I also knew that I wanted to think about how this brush with blindness had changed my photography.

Q: What is your philosophy regarding photography as a medium in which artists can tell their stories, and how does photography differ from prose, poetry, or drama?

A: They’re all remarkably similar for me; art in any form requires a certain level of craft, precision, and excellence. But these constituent parts have to transcend technique and somehow arrive at necessary utterance. My mind is in a very similar place when I’m writing and when I’m taking or selecting photographs. When I’m working, I’m aware that there’s something that needs to be served, and my goal is always to identify what that thing is and to serve it as best as I can. In a strange way, the particular form or genre I’m working in is superfluous, or at least secondary.

Q: You were born in the United States, but raised in Nigeria. How does this fact play into your writing and photography?

A: I’m a dual citizen, and this is not only a fact of paperwork for me. It means that I’m thinking about Nigeria and the United States both of them, all the time. I think about societal order, about philosophies of government, about the embedded culture of each place, about the relative power and influence of each country; and I use all this as a launching pad for thinking about and engaging with the world at large.

A: I feel very fortunate to have written Open City and to have been so well rewarded for it. The book began like this: late in 2006, I was finally ready to put down some words about 9/11, not as an explanation or study of what five years in the city after that event had felt like, but as an affective response. I sat down one evening, wrote the words “Open City” at the top of a page, and began to unfold a narrative about a man living in New York. The man was an invention, but I slowly got into his head. The book took three years to write, a process entailing mostly long walks, night and day, interspersed with brief periods of writing things down.

Q: Do you remember where you were when you received the news that you won the PEN/Hemingway Award?

A: I was at my kitchen table in Brooklyn. It was afternoon. I was dazed and when I emerged out of the daze, very happy. I don’t think I’d ever won anything before. It’ll always be special to me.

Q: What is your favorite Ernest Hemingway book or story and why?

A: The Old Man and the Sea was one of the first books that made me realize that a book is something that doesn’t just emerge perfected, that it is made and shaped by an artist, that the artist charges the book with carefully calculated psychological effects. I first read The Old Man and the Sea when I was nineteen. Not only do I remember the book’s plot, I remember where I was over the couple of days it took me to read it: in Boston, on the trains there, and in a café in Cambridge.

Q: What are you working on now, and how can your readers stay in touch with you?

A: I’m engaged in a new photography project and a long-term non-fiction project, in addition to my monthly photography column for the New York Times Magazine. Life is pleasantly but intimidatingly busy. I don’t think I’m lazy, but I’m fairly disorganized. Readers can find me on my Facebook author page, where I mostly share news, or on Instagram (@_tejucole), which I use creatively.

Young Hemingway, The Path to Paris, A discussion
Screening of a new Hemingway documentary: Young Hemingway: The...
END_OF_DOCUMENT_TOKEN_TO_BE_REPLACED