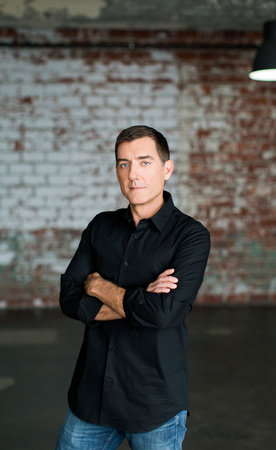 Q: As an undergraduate at Harvard, did you know you would become a full-time author?

A: Absolutely not!  The vaguest of ambitions only.  I got a C+ in creative writing, my lowest grade in my major.  Everybody thought I’d go to law school.  I often say I became a writer because I forgot to go to law school.

Q: How many years did you spend in Iowa City at the Iowa City Writers’ Workshop, and did that change the trajectory of your career?

A: Two years is standard, but I lingered for a third because I had a job in town I liked and I’d met a woman I wanted to stay with, another workshop student.  (We’ve been married twenty-seven years.)  Absolutely it changed my trajectory.  The kind of writing I did there wasn’t at all where I’ve ended up—I’m not a short story writer, I’m a novelist—but I did get my first publications while I was there, which was validating, and met many people who remain my closest friends.  Most important, the workshop gave me two years to focus on writing among other writers—to place it in the front of my life for a period of time.

Q: When was the last time you visited Iowa City to read at Prairie Lights Books?

Q: Can you tell us about Mary and O’Neil, your PEN/Hemingway winner, and the characters Mary Olson and O’Neil Burke?

A: I wrote it a long, long time ago, but it remains a book I feel very good about.  I spent far more time writing it than I have any subsequent book.  To some extent that was because I’m not a natural short story writer; I find the form tremendously arduous.  But the writing of it occurred in a period of my life when I was balancing many other responsibilities: teaching a full load, writing freelance on the side, tending to small kids in the house.  The book is more autobiographical than anything I’ve written or will write again.  I think you get one book like that, but that’s all.

Q: Congratulations on the success of the Passage trilogy. What was it like witnessing your prose evolve into a TV show?

A: Quite strange, actually.  The adaptation was very loose.  It drifted away from the book within about the first two minutes of the pilot.  I had only the lightest involvement with the whole thing—mostly PR and marketing.

Q: What is the focus of your class at Rice University?

A: I was a teacher for twenty-five years.  After eight years away from it, working on The Passage, I decided to go back in a small way to see what I’d do differently after writing a 900,000 word trilogy.  And the answer was nearly everything.  The focus of the course is narrative design—how to build a novel, in other words.  There’s a whole new generation of kids in creative writing classes these days.  These are the ones who grew up with the explosion of YA that began with Harry Potter.  They’re natural novelists—they’ve internalized all the rhythms and practices of the form.  Many of them have already taken a stab at it on their own.  Thus, the focus of the course is on planning and production, not editing.

Q: Do you have a favorite Ernest Hemingway story or book?

A: At Iowa, I sat down and read pretty much everything Hemingway ever wrote over the course of several months one winter.  Somehow, I’d never really gotten around to him until then.  The one that struck me hardest was For Whom the Bell Tolls.

Q: Do you remember where you were when you received the news about winning the PEN/Hemingway Award?

A: My office at La Salle University, where I was teaching at the time.

Q: Are you currently working on a new creation?

A: I have a multi-book deal with Random House, all free-standing titles.  After a rather too long start up period—I was creatively exhausted after finishing the Passage Trilogy--I’m moving toward completion of the first of those books.