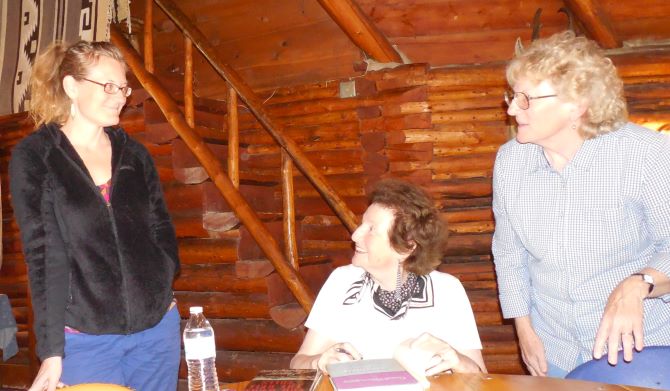 From left to right: Kimberly Slack, Valerie Hemingway signing her autobiography Running With the Bulls, and Judy Slack. (Courtesy of Judy Slack)

Ernest Hemingway spent a few weeks in the Big Horn area in the summer of 1928.  He came to Wyoming to work on A Farewell to Arms.  He spent most of this time at the Donnelley’s Upper and Lower Folly Ranch.  He arrived July 30 with his old WWI buddy, Bill Horne.  They stayed at Upper Folly for several days; however, there were several young female college students staying as guests.  This proved to be too much frivolity, so Ernest decided to stay at the Sheridan Inn.  He arrived August 3rd. This too proved NOT to be a quiet place to write.  The rooms were small (six feet by nine feet), with one bathroom per floor; he was staying on the third floor – in August – the rooms were HOT, none of the rooms had keys, and the noise was unbearable 24 hours per day because of people coming and going, along with the passenger trains arriving throughout.  He only wrote nine pages per day and needed to be accomplishing more on the book.

By August 8th, he found a quiet, cooler place to write at Lower Folly Ranch (the Hidden Valley Ranch – the home where Forrest Mars lived).  Here he was able to type 17 pages per day, and by August 18th he was happy to welcome his wife, Pauline.  They decided to stay at Spear-O-Wigwam to fish and relax.  Here he wrote the ending paragraph of A Farewell to Arms.  They stayed just a few more days then left August 26 to explore the Yellowstone area.  They returned to Sheridan on their way back east and attended a picnic at the Spear’s Bar V Ranch in the Wolf Mountains. 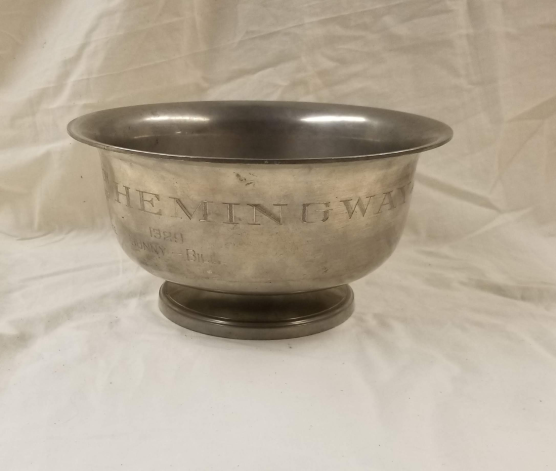 Darn and Pardee's daughter Lynn Erdman donated the pewter artifact to the library.

Papers and photographs in The Wyoming Room at the Sheridan County Fulmer Public Library include newspaper and magazine articles, the Folly Log book which includes original photographs of him with the guests at Upper Folly, photographs taken by Elsa Spear when he was staying with the Spear family at the Bar V, images of the Big Horn Post Office records that show his original signature, arrest records of the two bootleggers who were the supposed characters he wrote about in the short story "Wine of Wyoming," the pewter bowl that Ernest gave to Eleanor Donnelley as a hostess gift (see photo above), and other information about his stay that summer.  He was here in Wyoming less than two months, yet it took four months to round up all the paperwork in the library archives.   All of the materials listed are available for visitors to the library to access.

Judy Slack is now retired after working for many years at the Wyoming Room at the Sheridan County Fulmer Public Library in Sheridan, Wyoming.  A life-long resident of Big Horn, she is the author of several book on local history.  Her book Ernest Hemingway:  His 1928 Stay in the Bighorn Mountains of Wyoming includes facsimiles of newspaper clippings, photographs, diary entries, and other Hemingway-related materials available in the Wyoming Room.