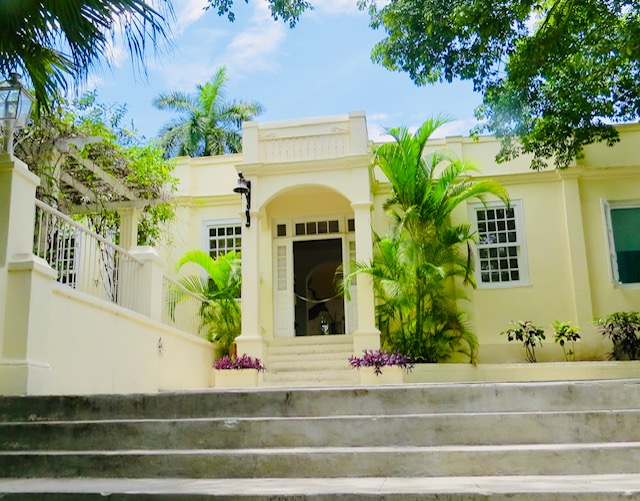 An exterior view of Hemingway's Cuban home, the Finca Vigía

Blog coordinator's note:  Except for a few fallen trees in the garden, the Finca Vigia, the Pilar, and the Restoration Center had no damage from Hurricane Ian.  After a 2 1/2 year period of physical absence due to the pandemic, the Finca Vigia Foundation is resuming work at the Finca on Monday, October 17, 2022.  A team of architects, engineers, mechanical and electrical experts are traveling to Cuba to spend a week at the Finca to make certain that the irreplaceable Hemingway collection remains safely stored and protected.

Are you curious about Ernest Hemingway’s Cuban home, Finca Vigía, where he lived the final third of his life? Would you like to see it?  Let us bring you there – virtually via three social media platforms:  Facebook, Instagram, and Twitter.

Since 2002 the Boston-based Finca Vigía Foundation has collaborated with the Museo Hemingway at Finca Vigía in Havana to preserve Ernest Hemingway’s legacy in Cuba.

We taught best practices in document conservation through hands-on workshops and lectures. We guided the architectural preservation of Hemingway’s home and his beloved boat, Pilar. Recently we built a Restoration Center with conservation laboratories and climate-controlled archival storage vault to protect the important Hemingway collection. Workforce development to Cuban colleagues was constant.

Collaboration is critical to our success. During our unprecedented journey we garnered international awards and were called a harbinger of better international relations, although we take no political stance. Our focus is on the shared cultural patrimony of Ernest Hemingway.

Our teams include book, photograph, and flat document conservation specialists; museum curators, architects, engineers, and tradespeople. We had to work quickly before the original papers deteriorated in the harsh tropical climate. Cuba is a nation rich in culture, but short on resources.

Original documents are stored in the archival vault in the Restoration Center.  Digital images are brought to the John F. Kennedy Presidential Library and Museum in Boston where they are available to scholars, aficionados, and school children. You may access them there.

Now that we have a presence on social media, we invite members and friends of the Hemingway Society to engage with us - let us know what you are interested in seeing regarding Hemingway’s life at the Finca.  We’ll do our best to find a photograph and provide a short narrative. Hemingway left his home assuming he would return. There is a lot to see, as those of you who have been there well know. 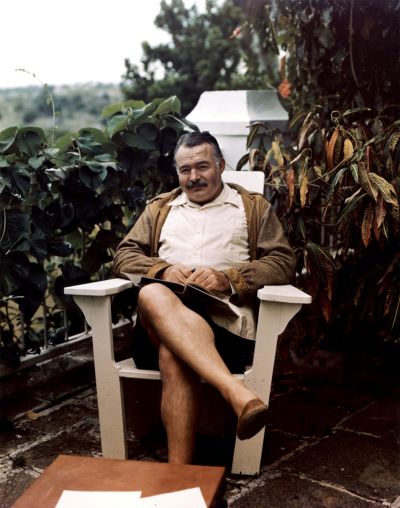 Ernest Hemingway at the Finca Vigía

Are you curious where he wrote in the cool morning air standing up at his typewriter – or the typewriter, bookshelves, photographs, the view he had while writing (spoiler alert: a blank wall)?  But oh … the view in the afternoon from the tower is magical with Havana harbor in the distance.

Perhaps you’re interested in the furniture custom-built by Cuban carpenters, the dining room table with crystal and china he helped select and napkins embroidered with the symbols he designed, big game trophies from his safaris, or the Murano glass doorknob brought back from Italy and installed on his bedroom door.  Did you know the upholstery in his living room is a flowered chintz? The clothes and shoes in his closet share space with a matador cape that hangs oddly next to his military uniform.  His phonograph still works - listening to arias from Hemingway’s favorite operas brings a chill even on the hottest day.

His garden is intentionally wild. He preferred it that way. He delighted in the fact that eighteen varieties of mangos grew on the trees at the Finca – some of which still produce the sweetest fruit each June. The path to the pool is lined with bamboo because, according to the museum director, he liked the humming sound produced by the stocks rubbing together in the wind.

There is so much to see, feel, and experience at Finca Vigía. 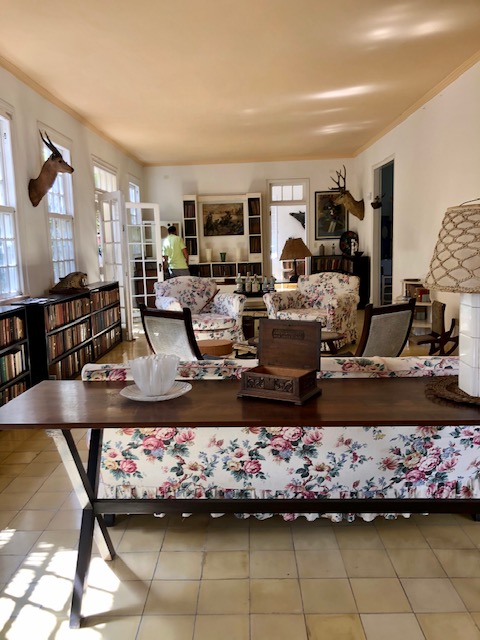 An interior view of a room in the Finca Vigía

It would be our pleasure to show you our work and transport you briefly to Finca Vigía where Hemingway wrote, laughed, entertained, told the cooks what to prepare, pitched endless innings of baseball to the neighborhood children when his sons visited, recorded his daily weight and blood pressure on the bathroom wall, accepted his Nobel, and loved two wives.

Look for us on Facebook, Instagram, and Twitter.  Posts and videos in late October through the end of the year will illustrate current conditions at Hemingway's beloved home.

Mary-Jo Adams has been the executive director of the Finca Vigia Foundation since its founding in 2004.  She also serves as a liaison between the Cuban and US governments as well as the various U.S. and Cuban entities involved with the project—the John F. Kennedy Presidential Library and Museum, the National Trust for Historic Preservation, Mystic Seaport, and Northeast Document Conservation Center on the U.S. side and the Consejo Nacional de Patrimonio Cultural and Museo Finca Vigía in Havana. When not traveling to Cuba, she is an avid lobster fisherman and boat captain.

In Memory of H. R "Stoney" Stoneback
The Ernest Hemingway Society is deeply saddened by the death of...
END_OF_DOCUMENT_TOKEN_TO_BE_REPLACED