Our Evening with Tim O'Brien

One event I had circled on my calendar for this conference was the talk by Tim O’Brien. I don’t imagine I have to go into a ton of detail about why I would be excited about this. O’Brien is one of the most accomplished and highly regarded authors in American literature, particularly from the latter half of the twentieth century. O'Brien won the National Book Award in 1979 for Going After Cacciato,  and 1990’s The Things They Carried was a finalist for the National Book Award and Pulitzer Prize.  Both are regarded as some of the finest literary fiction to address and depict the Vietnam War experience. It felt like a marquee event—a major writing coming to address our conference! I don’t get to spend a ton of time in the presence of National Book Award winners (I did spend one night in Winston-Salem drinking beer and singing karaoke with a National Book Award finalist, but that’s another story for another time) so I was glad we were getting this special opportunity.

You could tell everyone else was excited about this as well. The Lund Auditorium on the Dominican University campus was packed, each seat filled with a Hemingway aficionado or a lover of great literature or a participant in the cultural goings on of Oak Park and all those who might fall in between. The evening began with an introduction by our own Alex Vernon along with one by Associate Provost and Professor of English at Dominican University David H. Krause as well as the conferral of an honorary doctorate of humane letters to O’Brien by Dominican University President Donna Carroll and Senior Vice President for Finance and Administration Amy McCormack. From there, we moved into the part of the evening we were all looking forward to—Tim O’Brien’s talk. As Alex noted in his introductory comments, this would not be a lecture or a scholarly reading but rather something different, a talk about influence and love. And Mr. O’Brien delivered just that. Something that wasn’t the scholarly talk one might expect at an academic conference like this, but rather something that engages authentically and emotionally with Hemingway and thus something that we could all engage with as well.

There were many things about Tim O’Brien’s talk that struck me. I found myself truly touched and moved by the emotion he displayed throughout. His voice would crack at various points, particularly when talking about his father or his young sons. O’Brien also did an outstanding job blending together the extremely emotional and resonant with the very funny and witty moments. If you’ve read any of O’Brien’s fiction, especially The Things They Carried, you know O’Brien is a master at mixing the comic and tragic, the emotional and the stoic. The way O’Brien spoke of his own childhood and growing up with his father or the experience of raising his two sons and his relationship with them had both of these qualities. There would be moments and anecdotes that left you chuckling but then you’d find yourself fighting back a tear or two with the next. In all of this, O’Brien also reflected upon Hemingway and his influence, starting with his telling of his first reading of Hemingway at the behest of his father. O’Brien went on to talk about those first readings, how he wondered where the killing was in “The Killers” and how anyone could write a story as boring as “Cat in the Rain,” and throughout the talk highlighted the connections he made to Hemingway’s fiction and how it affected him as a writer and as a person. I really enjoyed one of his key points:  the idea of everybody having “their” Hemingway. I think there’s a great deal of truth to that. Particularly for a writer with such a large presence and reputation like Hemingway, not everyone is going to have the same Hemingway. I know that what I respond to in Hemingway’s fiction and remember most about it won’t be the same as other readers, but that doesn’t make the connection I feel toward the author any less legitimate. Though a great and accomplished writer whose fiction certainly bears the influence of Hemingway, O’Brien didn’t focus too extensively on that aspect of his influence. Instead, he talked a great deal about what Hemingway meant to him, what it connected him to in his past and throughout his life, things that speak to how Hemingway can be an influence and presence beyond just influencing writing. It made this bigger than just about how one writer influences another and I think that gave this talk a greater resonance.

I know I’m probably not doing the talk justice in my writing about it here, nor could I ever really (of course I can’t, I’m not Tim O’Brien!) but I hope I’ve conveyed just how outstanding this talk was. When it was all over, I walked up the aisle out of the auditorium in a kind of daze, still processing and moved by what O’Brien had read while his sentences and the images he crafted turned over and over in my mind. It was the sign that this was a very special event that I, along with the rest of the conference goers, got to attend and it certainly lived up to and exceeded my expectations. 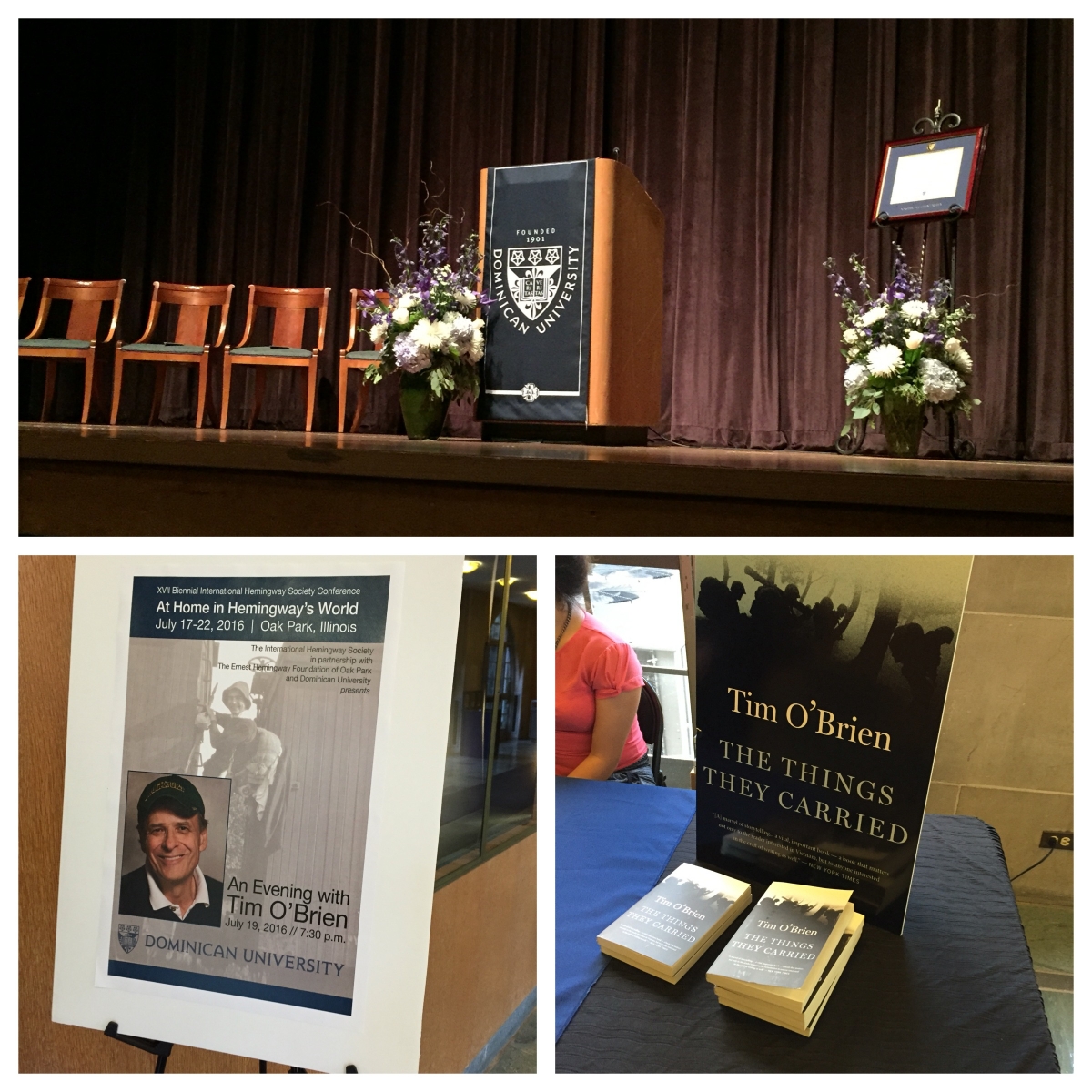