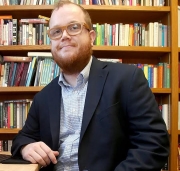 Q: Do you remember when you knew you would be a writer?

A: Yes and no. However, it was when I went to college that I realized what it takes to be a writer.  I saw first-hand the hard work involved in being a writer and that was what attracted me to the field.

Q:  Where were you raised, and did that place impact your writing?

A: Lawrence, Kansas. It impacted my writing in a couple ways. My father was the president of the University of Kansas, so we traveled extensively. The stories in Elegy on Kinderklavier were really influenced by that.

Q: What do you say to people who mention Arna Bontemps, the African-American poet and author, to you? Is your name a coincidence?

A: No, it is not a coincidence.  My dad was older when he had me, and he wrote the first biography on Zora Neale Hurston. He was a scholar of African-American literature. In fact, he worked with Alice Walker on the Hurston book. When he was conducting research on African-American literature, and Hurston, he became friends with Arna Bontemps and named me in honor of him. But, when I publish, I use my full name to honor both Arna Bontemps and my father.

Q:  What was your time like at the Iowa Writers’ Workshop?   Who had the biggest impact on you in Iowa City?

A: My time was wild … eventful. I was very young and pretty scared. I had successes, and at the same time I struggled a lot. My novel manuscript, my thesis, did not work out. I came in arrogant, became more arrogant, but got a wake-up call when my novel manuscript did not pan out. Overall, it was a good time. I learned a lot especially about what it really takes to make your life about writing. It is not really clear what it takes and how to deal with rejection while being optimistic, which you must be.

I was influenced by Lan Samantha Chang, a wonderful writer and a kind and generous mentor. She taught me how to help the people around me even when I had to be critical, and how to help myself.

Q: How long have you been at Baylor and how did you secure your position there?

A: I have been at Baylor for four years. I graduated from Iowa and taught there for one year. I secured my job here on the strength of my book contract. I am really passionate about teaching undergraduates because I enjoy working with the students. The creative writing program here has expanded, which I’ve enjoyed doing.

A: [Interviewer note: Hemenway chuckles.] Yes, I absolutely remember where I was. Baylor was on spring break, but I was working in my office. I was getting a lot of spam calls, so when my phone rang I assumed it was another spam call. After the woman (I do not remember who) told me I won the PEN/Hemingway Award I was so shocked that I cursed. Then I got worried that they would think that they gave it to a brute and would take it away.  I was a bit nervous about that actually. I was so surprised because my book came out from a small press. It had not received particularly good reviews, but it was a finalist for the Barnes & Noble Discover Award, which was great. I moved on in my mind believing that was it. Then the Hemingway folks called. The award changed everything. Just talking about it I get chills … I still cannot believe it.

Q: Please explain your concept for Elegy on Kinderklavier, and why death is prevalent throughout the book?

A:  [Concep for the book] First, I will talk about the novella and title story of the collection. I usually write in two ways. I begin with a question that haunts me or a combination of questions. So when I randomly came across a caring bridge website about a couple who had a child with terminal illness, a brain tumor, I immediately became curious. I mean how do you deal with the news when the doctor tells you that your child will not live? Secondly, I write research-based fiction. Once I read the caring bridge site, I started researching treatments for this particular tumor, and what it is like living with it. In addition, I was reflecting on complicated relationship, especially when one parent abandons a terminally ill child. It is difficult to imagine, so of course I imagined it.

[Why death?] While I was writing the book I was thinking a lot about loss and grief.  How we try to make meaning of life when we lose someone close to us. I was curious. A lot of my thinking was around that sadness. It is common –we do not like to think about these things, so I, of course, think about it.

Q: Are you working on a new project at this time?  Can you tell us about it?

A: I am. I am about to finish a new novel manuscript. I have been working on it for about five years. It is about a young man from Kansas who is taken in by a prominent political family. He works for the father in the Green Zone in Iraq. He is involved with the family on many levels.

Q: Do you have a favorite Ernest Hemingway book or short story?

A: Yes. The Sun Also Rises. You know, Hemingway was not perfect. People get on him for not using adjectives and not writing poetic prose. But, I love The Sun Also Rises.  I respect what is at the heart of the book: the sadness between Lady Brett and Jake.  I remember reading it in high school. I was waiting outside of class to go in, and after I read the last page the world went silent. My world opened up after that. I’d never experienced something like at that point in my life. People say he does not write about feelings. Read The Sun Also Rises and A Moveable Feast. Hemingway puts his heart on every page in both of those books.