Since 1987, the comic digest Topolino (Mickey Mouse’s name in Italy) has published more than ten stories featuring Hemingway as a character or based on one of the author’s stories.

I first stumbled upon Hemingway in Disney while visiting his Key West home on a publicity stop for my book, Hidden Hemingway. In one of the downstairs rooms, next to a doorway, someone had framed a comic book page of a Disneyfied-Hemingway appearing alongside Donald Duck. None of the museum docents knew where it came from, but the word balloons looked German. Eventually, I connected with my old friend Klaus Strzyz, a former editor and translator for Ehapa Verlag (Disney’s German comic book publisher). He helped me identify the story, which appeared in 1984’s Adventure of Uncle Scrooge Treasure #3: The Trip to Key West (Der Ausflug nach Key West).

Strzyz also introduced me to European expert “Donaldists” and their online databases that keep track of storylines and characters, such as Inducks. But in Italy, where Hemingway was wounded in World War I and set two novels and several short stories, his cult of personality was particularly strong in comics. In general, these stories are never translated into English or sold in the United States.

In 2000, Italian comic artist Giorgio Cavazzano spearheaded an initiative called “8 X 8...49” (a nod to Hemingway’s The Fifth Column and the First Forty-Nine Stories); this initiative challenged creators in the Accademia Disney to produce comics in Topolino based on Hemingway’s stories.

The comics aren’t straight adaptations, per se. Guido Scala’s Old Man and the Sea riff includes bits of Steven Spielberg’s Jaws and even a ghost story. They are more mash-ups of Hemingway’s story elements, grand silliness, and Disney’s comic book sensibilities. In Topolino  #2341, a six-page article explained the project, praised Hemingway’s writing, and proclaimed “...the real life of Hemingway was extraordinary, rich with great travel and marvelous adventure. And it was just this characteristic that convinced our artists to search for a point of contact between Ernest and Walt (Disney).”

Given that both Walt Disney and Hemingway were volunteer ambulance drivers for the Red Cross in World War I, it seems strange that no one has written a story in which they cross paths. True, Disney served in France while Hemingway was in Italy, but that kind of detail is usually overcome through the magic of storytelling. The opportunity remains.

There’s a great deal of research to be done on Hemingway adaptations in foreign comics, so we offer these images and descriptions as a primer—as ephemera available to spark future scholarship. 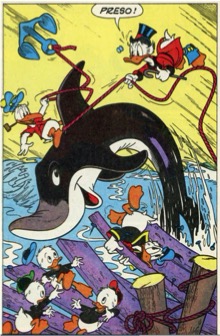 Donald Duck, his nephews, and Scrooge McDuck star in a parody of The Old Man and the Sea by Guido Scala. 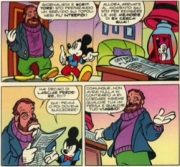 In Hemingway’s centennial year, Papa shows up to inspire adventure and courage in Mickey Mouse. Hemingway interviews Mickey for a profile and through their conversation, Hemingway emerges as an important mentor in Mickey’s life. Written by Alessandro Sisti and titled “Per Chi Suona il Campanello?” (“For Whom the Bell Tolls”), the story features art by Graziano Barbaro, who used Yousuf Karsh’s famous portrait as the basis for his depiction of Hemingway. 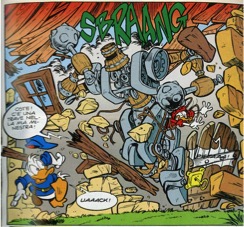 In “Il papero che volle farsi re,” Marco Forcelloni loosely adapted “The Capital of the World,” exchanging Hemingway’s waiter with bullfighting aspirations with Donald Duck, who overcomes a steampunk robot in the Middle Ages. 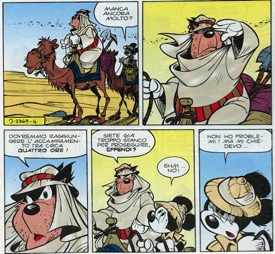 Some Other Hemingway-inspired Italian Disney Comics for the Curious…

Special thanks to Mark Cirino for the translation assistance, and to Gianluigi Filippelli for his very helpful blog post on the “8 X 8...49” project: http://www.lospaziobianco.it/alcaffedelcappellaiomatto/hemingway-in-disney/