Another Source for "God Rest You"? 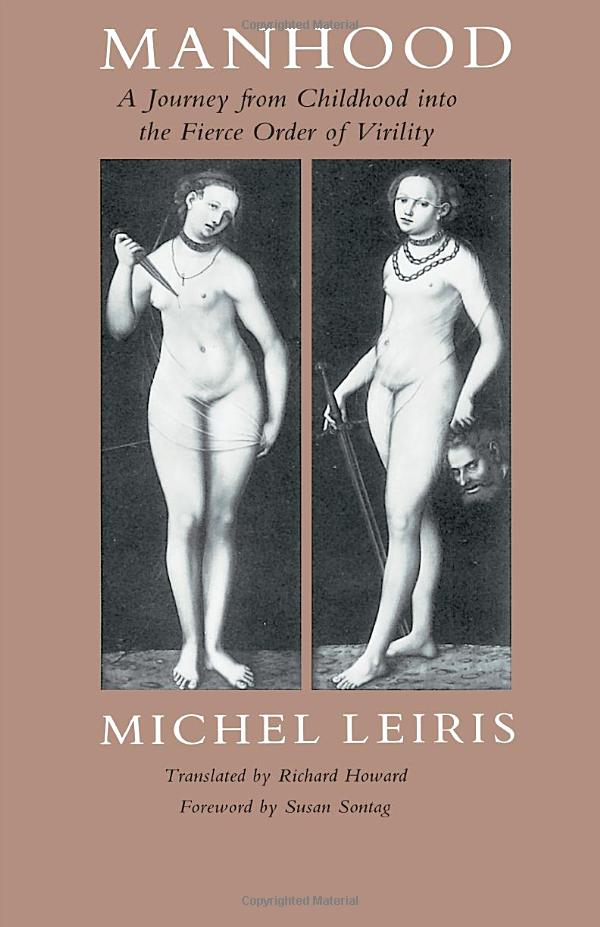 Cover image of Manhood, a memoir by Michel Leiris, published by the University of Chicago Press

As with most of us, my research files are filled with good intentions and orphaned morsels that have never seen daylight. Every time I go back to one document or another in search of a fact or verifying a memory I’m reminded of something I’d long forgotten about or that I wished I’d used somewhere. Today it was a random Hemingway note I’d made just two years ago, and now I realize the discovery was too good to remain hidden. But I’ll leave it to someone else to do the heavy lifting.

I happened to be reading Manhood, an astoundingly confessional memoir—“self-lacerating” was a term Susan Sontag once used—by the French writer Michel Leiris (1901-1990). At the time I was looking at how Leiris’s book might resonate with the work of the American writer Evan S. Connell, whose life and output I was exploring for a biography (now published). Sontag had reviewed an English translation of the book (by Richard Howard) in 1964, around the time Connell was writing his psycho-drama novel The Diary of a Rapist.

Well, what does this have to do with Hemingway? Good question.

I was only a few pages into the book, near the end of Howard’s Translator’s Note, when I learned of an extreme mental breakdown, one of several apparently, of which Leiris wrote: “In November 1929, after various disappointments and disasters dating back to the spring before … I appeared at a friend’s house around five in the morning and asked to borrow his razor with the—more or less sham—intention of castrating myself, a request my friend evaded by informing me that all he had was an electric razor.”

The anecdote, of course, brings to mind the scene in “God Rest You Merry, Gentlemen,” in which a young man appears at the hospital emergency room bloodied in his attempt at self-castration.

Could this be something more than coincidence? Hemingway, of course, was no longer living when that translation of Manhood appeared. But in 1929, back in the U.S. for the most part, he still had friends in Paris, including artist and surrealist acquaintances who also knew Leiris.

“God Rest You” was first published in 1933, and Philip Young tracked its composition over a period of months in 1932. Young and others connected Hemingway’s story with a handful of letters given to him by Dr. Logan Clendening, a Kansas City doctor and nationally syndicated advice columnist. As Young described it, one letter was from a New Jersey teen-ager troubled about his experience with sexual desire.

Still, the Leiris story is compelling, and I’m just wondering if it could have contributed to Hemingway’s crafting of “God Rest You.”

Did word get around about Leiris’s psychological crisis? Was his razor tale the talk of the town?

Leiris’s name does not appear in volumes 4 or 5 of the collected letters. Nor does he show up in the inventory of correspondence at the JFK’s Hemingway Collection. So, for now, there’s no real answer and I suspect that what I am describing here is a proverbial wild goose chase. Then again, in the context of Hemingway studies, sexuality, and the subject of “manhood,” I also suspect there could be more here to explore. Go!

For those who might be interested to learn more about Leiris, here’s a convenient and rather recent essay from The New Yorker.

Steve Paul is the author of Hemingway at Eighteen and Literary Alchemist: The Writing Life of Evan S. Connell. He contributes regularly to The Hemingway Review’s bibliography report.

In Memory of H. R "Stoney" Stoneback
The Ernest Hemingway Society is deeply saddened by the death of...
END_OF_DOCUMENT_TOKEN_TO_BE_REPLACED