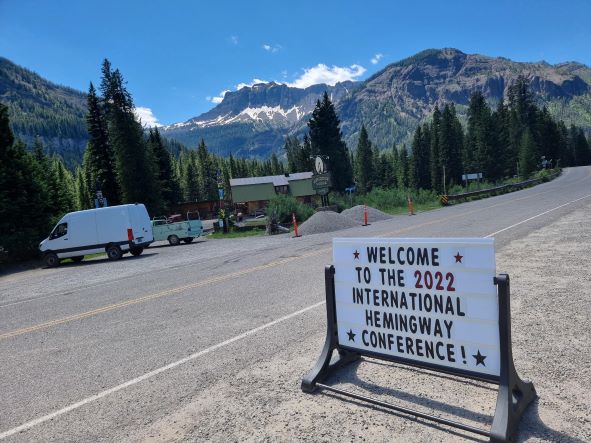 Blog coordinator’s note:  A version of this article was first published in the ReadingRoom section of Newsroom, a New Zealand online news service.

Key contributors to the conference were those involved in the Hemingway Letters Project, a Cambridge University Press-sponsored initiative, which seeks to publish over time and in chronological order the significant letters written by Hemingway. Volume 6, covering 1934-36, is to be published next year. The letters’ editors, who come mainly from Pennsylvania State University, are expecting seventeen volumes in all. The last one is projected to be published in 2042. For his sins Hemingway was a prodigious letter writer, and much new information about him and his works is steadily coming to light as the content of the letters becomes known.

The scholarship demonstrated at the conference was eclectic. There were several concurrent sessions, each one with three or four presenters and each speaking for twenty minutes or so. Sample topics included various aspects of Hemingway's health, including his PTSD from war and other wounds. One scientist, on the basis of Hemingway’s asymmetric male pattern baldness, advanced a theory that the writer may have been born with a female zygote, which in turn may have explained Hemingway’s androgynous tendencies in his later years. To pursue that theory would involve testing his DNA, much of which apparently exists in the form of letters and personal items in museums and elsewhere.

There was a dissection of various aspects of his marriages, and there even was a lawyer discussing the jurisdictional issues affecting his three divorces. One of the featured speakers was octogenarian Valerie Hemingway, Hemingway’s secretary in the last two years of his life, who later married Hemingway’s third son, Gregory.

All the time there were examinations of his writing style and of characters, books and short stories. A number of local historians were brought in to inform us of his many interactions in Montana and Wyoming and of the relevance to his written works. It is acknowledged that his description of the forest, mountains and streams in For Whom the Bell Tolls is based on the corresponding area around Cooke City and the nearby Yellowstone National Park. 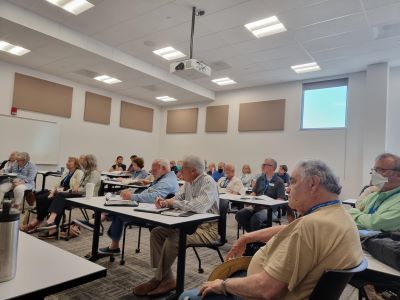 Conference attendees listen to a presentation at Sheridan College in Sheridan, Wyoming

In true Hemingway fashion, a conference like this was by no means all hard work—there was plenty of drink on hand while discussing conference topics and to wash down what I found to be, in general, unhealthy American food.

To specialise in Hemingway is indeed to be eccentric in many ways, and no one can accuse many of the delegates of not being their own people. One speaker was Philip Greene, a US academic lawyer who had spent a year at Victoria University in Wellington fifteen years ago as a visiting expert in cyber law, and his principal claim to fame at the conference was that he is the author of the wittily named To Have and Have Another, a book of recipes for cocktails that Hemingway reportedly enjoyed.

The conference was a friendly and inclusive one, and many new friends I will see again at the next conference, to be held in Bilbao and San Sebastian in two years’ time. Other recent conferences have been held in such places as Paris, Venice, Ronda, Sun Valley, Key West and Kansas City. Ernest had no shortage of interesting locations during his life.

Dermot Ross is an Auckland lawyer whose first novel, currently titled Hemingway’s Goblet, is expected to be published in 2023

In Memory of H. R "Stoney" Stoneback
The Ernest Hemingway Society is deeply saddened by the death of...
END_OF_DOCUMENT_TOKEN_TO_BE_REPLACED