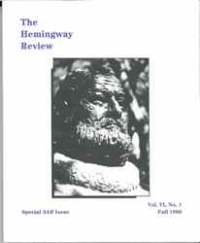 • From the rue Saint-Jacques to the Pass of Roland to the "Unfinished Church on the Edge of the Cliff" by H.R. Stoneback

• Hemingway's Medievalist Impulse: Its Effect on the Presentation of Women and War in The Sun Also Rises by Kim Moreland

• The Writing of the Manuscript of The Sun Also Rises, with a Chart of Its Session-by-Session Development by William Balassi

• Toreo: The Moral Axis of The Sun Also Rises by Allen Josephs

• Hemingway's Sun as Title and Metaphor by Robert A. Martin

• Hemingway, Ernest. The Garden of Eden (Review) by Allen Josephs

• Hemingway, Jack. Misadventures of a Fly Fisherman: My Life With and Without Papa (Review) by Susan F. Beegel

• The Snooze of Kilimanjaro by Mark Sibler

Wyoming and Montana Conference Preview - Recording
In just over a month, many of us will meet out west for the...
END_OF_DOCUMENT_TOKEN_TO_BE_REPLACED