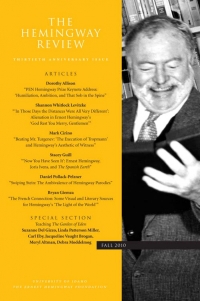 • "In Those Days the Distances Were All Very Different": Alienation in Ernest Hemingway's 'God Rest You Merry, Gentlemen’ by Shannon Whitlock Levitzke

• Beating Mr. Turgenev: "The Execution of Tropmann" and Hemingway's Aesthetic of Witness by Mark Cirino

• "Now You Have Seen It": Ernest Hemingway, Joris Ivens, and The Spanish Earth by Stacey Guill

• Swiping Stein: The Ambivalence of Hemingway Parodies by Daniel Pollack-Pelzner

• "In the Stream of Life": Teaching The Garden of Eden Contextually by Linda Patterson Miller

• Teaching Modernist Temporality with The Garden of Eden by Carl Eby

• Posthumous Queer: Hemingway Among Others by Meryl Altman

• "Who's Normal? What's Normal?": Teaching The Garden of Eden through the Lens of Normality Studies by Debra A. Moddelmog

• Memories of Hemingway: A Letter from Dawn Powell to Carlos Baker, 10 May 1965 by Sara Kosiba, Tim Page

• Art Matters: Hemingway, Craft, and the Creation of the Modern Short Story (review) by Frederic Svoboda

• The Hemingway Patrols: Ernest Hemingway and His Hunt for the U-boats (review) by Jeffrey Herlihy

• in his time: Ernest Hemingway's Collection of Paintings and the Artists He Knew (review) by William Gallagher