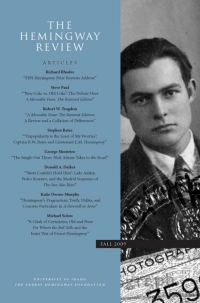 • "New Coke vs. Old Coke": The Debate Over A Moveable Feast: The Restored Edition by Steve Paul

• A Moveable Feast: The Restored Edition: A Review and a Collation of Differences by Robert W. Trogdon

• "Unpopularity is the Least of My Worries": Captain R.W. Bates and Lieutenant E.M. Hemingway by Stephen Bates

• The Jungle Out There: Nick Adams Takes to the Road by George Monteiro

• "Brett Couldn't Hold Him": Lady Ashley, Pedro Romero, and the Madrid Sequence of The Sun Also Rises by Donald A. Daiker

• Hemingway's Pragmatism: Truth, Utility, and Concrete Particulars in A Farewell to Arms by Katie Owens-Murphy

• A Clash of Certainties, Old and New: For Whom the Bell Tolls and the Inner War of Ernest Hemingway by Michael K. Solow

• Rabbit at the Riverside: Names and Impossible Crossings in Hemingway's For Whom the Bell Tolls by Alex Link

• An Error in the Introduction to A Moveable Feast: The Restored Edition by Robert L. Yarup

• "Dialogue with a Maestro": An Interview with Eric Ting Adapter and Director of a Production of the The Old Man and The Sea by Richard J. King

Wyoming and Montana Conference Preview - Recording
In just over a month, many of us will meet out west for the...
END_OF_DOCUMENT_TOKEN_TO_BE_REPLACED